NEO Price Analysis: NEO down to $14.74, Will It Manage To Outsmart The Bears?

Over the past month, NEO’s performance has been sluggish with the bears dominating the coin most of the time. NEO price reached a low of $11.08 on 6-June-19 as per 18:00 UTC. The movement of the coin was more or less stable from 6-June-19 till 22-June-19. Since 22-June, the prices saw a sharp rise and reached a level of $20.84 as per 00:45 UTC time. It could not survive its performance at this level, and prices slowly started to decline, and while writing, the movement of the coin was bearish.

Let us have a look at the NEO to USD price comparison: 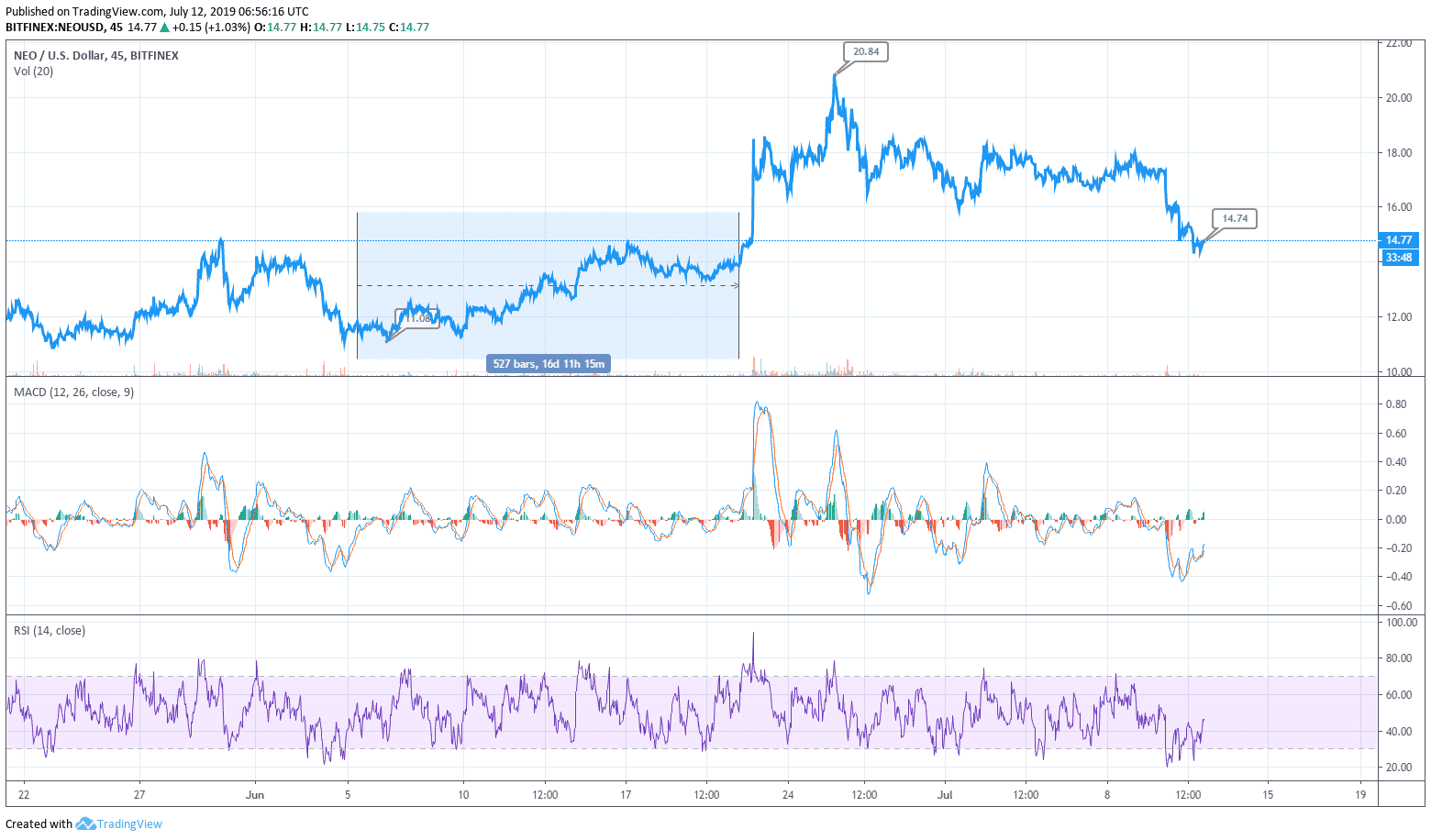 Comparing the data of 26-June-19 and today, NEO price, which was $20.84 on 26th June and today the coin is reflecting a downward trend by 29%. The coin may reach to the highest level of $14.98 today but would not be able to sustain it before seeing a fall in the prices. After a week’s time, NEO will more or less gain stability and prices would be around $16. By the end of 2019, NEO can reach optimum levels of $25.

MACD indicator also confirms that the current movement of the coin reflects a downtrend. The coin was an overbought a couple of times in the month of June. NEO coins have been oversold yesterday and today in the early hours. Now the number of coins being traded in the market seems to be on the neutral area. Experts suggest waiting for a week’s time before you wish to invest in NEO as the coin will manage to bounce back from the current scenario by then.

Felicia Learned
Felicia well-known for her writing skills works as a content writer lead in our team. She also has a deep interest in forex, Finance & cryptocurrency funds and guides people dealing with a cryptocurrency exchange. She loves reading finance blogs in her free time. For any issues, you can contact her through email: felicia@forexnews.world.
Previous articleFresh Startup Boom Arrives in India as Tiger Global Goes on Deal Making Spree
Next articleSources Claim – Verizon Company Searched Buyers for Yahoo Finance

0
Chainlink exhibited astounding improvement in the price over the last 30 days. In the last few days of January, the currency was trading with...
Read more
Technical Analysis

Will Binance Coin Manage to Cross $24 Under Ongoing Volatility?

0
Binance Coin (BNB) had not started the year on a good note but later had managed to outsmart the bear pressure at regular intervals....
Read more
Technical Analysis

Will Chainlink Continue Its Winning Momentum for the Short-term?

0
Chainlink (LINK) has not been able to perform well during the start of the year due to the continual bearish pressure in the crypto...
Read more

0
About Banxso Thousands of trading platforms online have emerged with the adoption of the internet, and now they are paving the way for a range...
Read more

0
Despite the fact that the value of Bitcoin (BTC) has dropped by 40%, MicroStrategy's Michael Saylor has no plans to sell his $5 billion...
Read more

Understanding the Concept of Hard Fork

Will Tezos Continue to Move Steadily in the Upward Direction?